Twisting and Turning in Time 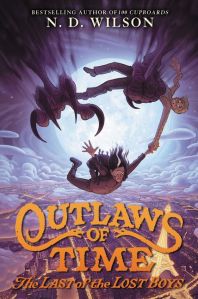 I spent most of today (except when mowing and weed-eating the yard) reading the third and final volume in N. D. Wilson’s Outlaws of Time series: The Last of the Lost Boys.  Even though the second book in the series, The Song of Glory and Ghost, dropped this time last year (and I bought it release-week), I didn’t actually finish reading it until this morning, too.  One of the great things about Wilson’s young adult fiction is that it’s just complicated enough (partly because of time-travel, partly because of an ever-deepening backstory) to really suck you in . . . once you get into the groove.  A lot has happened with Wilson since I read the first book in the series.  Wilson was diagnosed with a tumor behind his ear.  He also released a “prequel” to his other two book series (100 Cupboards and The Ashtown Burials series).  The third book in the Outlaws series reads much more like that book, The Door Before, than the first two Outlaws books in that it’s shorter and not quite as dense narrative/action-wise.

The thing that’s most interesting about this third volume in the trilogy is that the main story for the series seems to come to a conclusion at the end of book two (spoilers: Sam and Glory defeat the Vulture).  Beyond that, this book involves both a perspective jump and a time jump, with many of the peripheral characters of previous books absent and the main characters aged a number of years.  It’s kind of a gutsy move, really, particularly with people accustomed to trilogies working out a certain way.  And yet it really works here, making the story much more intimate (and the stakes oddly and appropriately higher).  It also leaves multiple timelines (?) more open-ended that expected.

Which begs the question: where does Wilson go from here?  Wilson has moved into movies and directing over the last few years.  He’s released a couple of non-fiction works, too.  The third book in the Ashtown Burials series, The Empire of Bones, actually ended on a cliffhanger (and with some issues with the publisher).  It would be great to see what happens next with those characters . . . particularly since at least one thing is revealed in The Last of the Lost Boys that brings even more threads of “the Wilsonverse” together (even more so than The Door Before, really).  Hopefully we’ll hear news of what’s next sooner rather than later.

This entry was posted in Books and tagged N. D. Wilson. Bookmark the permalink.