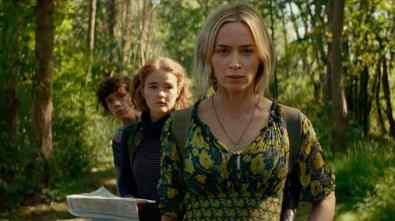 If there’s anything that The Lord of the Rings has taught us, it’s that “Point A to Point B” stories are rarely as easy as they should be.  What’s true in LOTR on the grand scale is ultimately true in A Quiet Place Part Two on a much smaller scale, where really it feels like you’re just trying to get across town or across a few fields without being pummeled by an alien.  Which makes the story of the Abbott family that much more engaging.  It’s a story grounded in the adult actors but one that moves forward because of the kids.  And because of how things turned out in the first movie, you just never know who’s not going to make it from Point A to Point B.

A Quiet Place Part Two was my shy-of-triumphant return to Regal Cinemas at Dole Cannery.  I’ve been going to movies elsewhere in town since late last fall, but Dole has been closed this whole time.  I was surprised to find that little had changed, as they were starting major renovations just prior to the pandemic.  There were two big changes, alas: paper straws (which I should have seen coming) and Pepsi products instead of Coca-Cola (which might be unforgivable).  The seating was still stadium but wasn’t recliner-seating yet, which has its own charm (though a little less in pandemic days).  But it was still nice to get back to a place I had loved for so long.

And the movie was great.  Terse.  Taut.  To the point.  There was no fluff in the story.  Spoiler: you do get one flashback early in the movie, which is good and shows me something that I love most in disaster/horror movies: how things get started (even if they don’t get much explanation).  The rest of the movie is about moving from here to there and all that can happen in between.

A Quiet Place Part Two really is the cinema at its best.  I’m not sure I would have been as invested if I had a remote control in one hand and my cell phone in the other.  But there with the big screen and the immersive sound: it was the best movie-going experience I’d had in a long while.  It makes me more hopeful for the summer movie season.  And even though it was a year late, A Quiet Place Part Two was worth the wait.

This entry was posted in Movies. Bookmark the permalink.