Waiting for the King (but not for the book)

Posted on November 4, 2017 by awtraughber 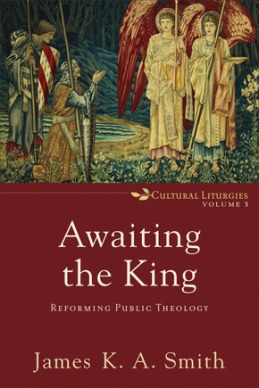 Thanks to the kind folks at Hearts and Minds Books, I was able to get my copy of James K. A Smith’s Awaiting the King a few days before the actual release day.  And so I waited for Thor:Ragnarok by reading through the preface and introduction to the third volume in Smith’s “Cultural Liturgies” series.

There’s something very comfortable for me about reading Smith.  In some ways, he reads a lot like Steve Garber: a consistent blend of pop culture references with ancient texts and everyday concerns that sheds real light on things too easily taken for granted.  It definitely makes you want to take your time with the book.  When necessary, Smith writes with a good kind of density, too.  Good footnotes and interesting asides abound (and really, do I want to see the oft-maligned The Postman now?  maybe a little).

From the outset, it is clear to me why Smith looks askance at Rod Dreher’s “Benedict Option.”  It has something to do with hope, I believe.  He (perhaps incorrectly) interprets Dreher’s proposal as a kind of giving-up-hope, which defeats a key part of Smith’s purposes in the book.  Reading Smith excites me, but Dreher’s work connects more with lived experience and concern, I think.

Thirty pages in, one of the things that I am appreciating most about Awaiting the King is the constant reminder of the significance of the telos, the end point of the design, that to which things point.  I feel the tension of the lack-of-telos often, really.  It is a refusal to see (or be reminded of) a viable big picture.  And so we are too often left with our own little “scenes” and our own individual “purposes” when something more clear and true is available.  That ought not be, particularly when it comes to church and to education, to areas of life where telos should be “baked in” to the composition of things.

Smith asserts something basic and easily forgotten in the introduction that Christians today would do well to remember.  Smith asserts:

That’s true across the board, whether or not you believe that a good God has involved Himself intimately in the unfolding of creation.  I’m looking forward to seeing how Smith unpacks that thought particularly while using the work of Augustine and O’Donavan for framing the big picture of what is at stake.

This entry was posted in Books, Faith and tagged Cultural Liturgies, James K A Smith. Bookmark the permalink.