Monks without a Monastery 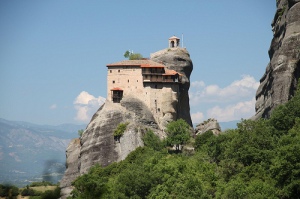 Joshua Gibbs, who teaches at a classical Christian school in Virginia, recently recounted what happened when he challenged his sophomore students to consider the “rule” of St. Francis in the context of adopting their own “rule” for living for one week.

“Rule,” of course, is a tricky word for many of us, one rife with opportunity for equivocation and miscommunication.  Most of us hate rules.  But most of us also understand our need for rules.  And then, when you add the monastic concept of “rule” into the mix?  Well, that doesn’t happen as often as it should.  Gibbs reflects:

What do American Christians think of rules? Christians are suitably concerned that this nation should have the right rules governing marriage and immigration and abortion. But when a Christian leaves earthly concerns behind and begins to dwell on working out his salvation with fear and trembling, he is often tempted to turn up his nose at the rules, dismissing them as legalism.

And legalism, definitely, is something we are constantly challenged to avoid.

If legalism is a disease, the cure is worse. Christians in this country have heard “Doing X does not make you a Christian” for so long, they do not know what Christians do. Many are offended at the idea that Christians should do anything, for salvation is a state of being, and being transcends acting. The less we do, the greater our faith.

Gibbs has much to say in the article concerning temptation, which is pointed and refreshing.  Even recently reflecting on the Christian year (starting soon with Advent), I was reminded of how the series of moments from Advent to Pentecost, too often clothed in party garb, is really corrective and medicine.   Gibbs adds:

If Christians would fight temptation, they must have not only the desire to win, but a strategy for obedience that respects the prowess of their enemy.

For Gibbs, a “rule” in the monastic vein isn’t simply about things Christians already know they should do.  Some of this students mentioned things like gossip and kindness, things explicitly mentioned in Scripture.  Things like bed times and tech use? not so much.  And that’s where a “rule” comes into place.

I’ve been thinking about rules for some time, definitely since moving to Hawaii a decade-and-a-half ago.  Some of that stems from the practical reality of living alone, which can make the rhythm of life inconsistently difficult (and assumes, rightly or wrongly, that families and households have it better).  Some of that stems from a felt frustration with church life, with Christian community: how do you maintain a proper disposition of faithfulness when church life looks more like programs and parties?  How, even, do you talk about the Christian life without a language to support it (and the language of programs and parties is definitely deficient here)?

Scripture, perhaps, asserts that “this is the way the world moves.”  A “rule,” then, is a way for us to move through it and with it.

As we move closer to the beginning of the church year with Advent, I can’t help but feel some hope for the return of a kind of rhythm that has disappeared during these months of “ordinary time,” when it has felt like “anything goes” and that whatever happens happens.  Not only that, but simply being pushed back and forth amongst different calendars (be it from Hallmark or the school hallway) makes you want to find good root in something deeper.

You can read more of Gibbs’s article here.

This entry was posted in Faith, Teaching. Bookmark the permalink.