A friend recently recommended the 2013 comedy Are You Here to me based on the following quote about friendship:

See, nobody believes in friendship.  People talk about it, you see it on TV, people drop by, go to the doctor together, no one eats alone.  But most people are alone.  That’s the thing about friendship: it’s a lot rarer than love because there’s nothing in it for anybody.

The quote is dialogue given by Owen Wilson’s character, a listless man who does his best to love well his deeply troubled friend, played by Zach Galifianakis.  It’s a brilliant and raw moment in a movie that tends to push things in weird directions.  The person the dialogue is said to, played by Laura Ramey, responds:

These kinds of moments, where something profound is said in the midst of a far-from-profound story, are rare but inspiring.  Particularly when it comes to the topic of friendship. 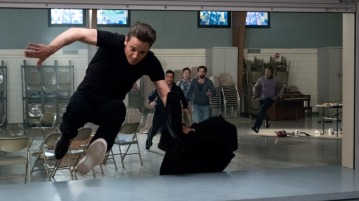 This weekend saw the release of another movie about friendship.  TAG tells the based-on-real-life story of a group of friends who found a way to play “tag” for decades after graduating from high school.  The movie is almost more action than comedy.  Even still, there are some truly raw moments here as well.  And it’s not just the desperation that the characters feel (which is also true of Are You Here).  It’s the sense of something important being at stake with the game.  One of the main characters, played by Ed Helms, sees the game as a necessary extension of a good life lived together  . . . and a source of solidarity amongst those who are often “it.”  On the opposite end of the game-spectrum is Jeremy Renner’s character, who has spent the past 30 years “never being ‘it.'”  And as farcical as the movie can be, there’s something real beating at the heart of it.

The most recent movie closest to the DNA of TAG is Game Night, and its a genetic quality that goes beyond having a “game” as the plot device.  In both movies, there are friends on the inside and acquaintances/would-be-friends on the outside.  There is something like pride at play in both, too. There’s also the question of “just how fake is this?” raised throughout both stories (and that’s from an inside-the-story sense, particularly as things get outlandish or “too coincidental”).  But there’s also something in each about our need for one another, in particular our need for connections that include but also go beyond spouses.

At one point in the movie, the reporter played by Annabelle Wallis comments to Helms’ character that “It seems like the game has really kept you guys connected.”  Without missing a beat, he responds with “This game has given us a reason to be in each other’s lives.”

A few days from now, fans of Edgar Wright’s The World’s End will probably be at least a little mindful of the events from June 22: the day that the story of “the Golden Mile” comes to head.  The World’s End is final “chapter” of the Three Flavours Cornetto Trilogy.  These movies, starring Simon Pegg and Nick Frost, are some of the best movies about friendship from the last ten years.  There are a few resemblances between TWE and TAG.  Long-term friendships potentially strained by events in adult life.  A quest taken so “set things right.”  The introduction of a female from the past that divides members of the group.  And, well, at least one scene that bridges the movies concerning people in confessional moments.  On some level, TAG is The World’s End without the city-wide conspiracy.  Both of them are ultimately concerned with people and the need for friendship, for some kind of authentic connection that gives both joy and meaning.  It’s good to see movies every now and again that can do that.

Quick word of caution: movies mentioned here are rated R. Quotes and concepts might be diamonds in the rough, with the rough being more evident in some than in others.

This entry was posted in Friendship, Movies and tagged The World's End. Bookmark the permalink.