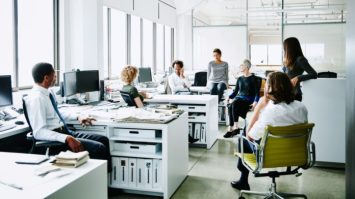 Last month I posted a couple of links to Comment Magazine (along with an extended quote from Henri Nouwen) on the topic of loneliness.  Comment’s most recent issue is about social isolation, and little by little they have released parts of the issue online for free.  The most recent article, written by Brian Dijkema, has to do with social isolation and work.  He starts the article with a sobering realization:

If you work full time for the same amount of years that your children are in the house (let’s say twenty-five), you will have spent fifty thousand hours with your colleagues. That is a lot of time. So much time that it’s possible that at the end of that quarter century, you will have spent more of your waking time at work than with your kids as they grew up.

My first response as I contemplated this was . . . depression.

That’s really a depressing thought . . . and I don’t even have kids.  But I do get the sense of the challenge of proportion and the reality of how we spend our time.  This is even true for teachers, who often cite extended summer vacations as a reason for pursuing the job.    But for a single guy like me, even extended summer vacations away from routine and a more consistent presence of others, can be something of a struggle.

Dijkema has a lot of good things to say about the workplace as a necessary social environment.  It’s a well-cited article (and he even links to some classic Looney Tunes workplace humor!) that is good reading for lots of people, especially for those who lead out.  One of the article’s best quotes:

The basis for determining the value of human work is not primarily the kind of work being done but the fact that the one who is doing it is a person. The sources of the dignity of work are to be sought primarily in the subjective dimension, not in the objective one. . . . In the final analysis it is always man [the Latin here is hominem, plural homines, or people] who is the purpose of the work, whatever work it is that is done by man—even if the common scale of values rates it as the merest “service,” as the most monotonous even the most alienating work.

Among the many things Dijkema accomplishes in the article is the reminder that work can be and should be good, that there is both personal and social dignity in how we “make a living.”  And while the language of unions is pretty foreign to me, I get a sense of what he means when he talks about leading and challenging through dignity.  It’s a good article that you can read here in its entirety.

Speaking of work and vacation, I’m now a week out from my last official meetings for the year.  And while I’ve still got stuff to do, I’m also just under a week from heading out for a mainland excursion that will include about five states.  So the days are much quieter right now, which is both good and a challenge for me.  Dijkema’s article is a good reminder for the social significance of work, even when you don’t necessarily have to go in.

This entry was posted in Faith, Friendship, Teaching. Bookmark the permalink.