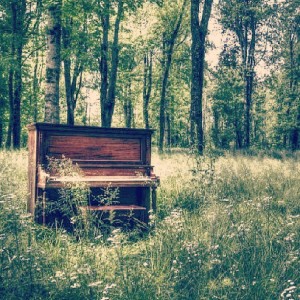 Douglas Coupland prefaces Bit Rot, his most recent collection of essays and stories, with this:

When the pioneers crossed North America from east to west, the first thing to be thrown off the family Conestoga wagon was the piano, somewhere around Ohio.  Then, somewhere near the Mississippi River, went the bookcase, and by Nebraska off went the books . . . and by Wyoming, everything else.  The pioneers arrived in the Promised Land owning only the wagon and the clothing on their backs.  They may have missed their pianos, but in the hard work of homesteading, they didn’t have the time or energy to be nostalgic.

This image, Coupland asserts, is one way of understanding the person journey he has been on since the dawn of the 21st century as he “shed[s] older and weaker neurons and connections and create and enhance new and unexpected ones.”

I understand the feeling.  In another recent post, I expressed a feeling of having to deal with baggage, with the accumulation of things.  And so the imagery of “leaving it all behind,” even bit by bit, has its appeal.  I don’t think, though, that I’m at a place anywhere near Coupland, who adds:

There is something healthy, I think, about this.  And yet to write off pianos and books and the shelves that hold them as simple nostalgia seems a bit much.  I think we are all going through some version of this triage, though, trying to figure out what stays and what goes as we move to whatever seems to be next in contemporary American culture.  As always, that makes me grateful for a thinker and writer like Coupland.

I’m looking forward to reading Bit Rot over the course of the summer.  Over 60 pieces in just over 400 pages makes it a piece that will hopefully be as much a joy as Jonathan Lethem’s The Ecstasy of Influence.  You can order your own copy of Bit Rot here, or you can purchase it at your local bookstore.

This entry was posted in 2017, Books, The Long Story. Bookmark the permalink.