Unclosed Loop: How to Think 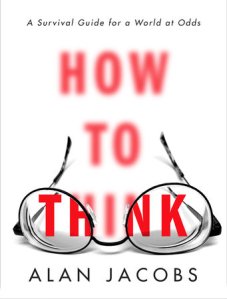 The floor of my digital mind is littered with reflections that didn’t make it to this site.  At the end of December, I started titling a handful of entries with the phrase “Unclosed Loop.”  It’s a reference to something I learned a few years ago from Douglas Rushkoff, who suggests that lots of stress comes from mental loops that we can’t seem to bring full circle.  What’s nice is that this keeps some things open for reinterpretation as life continues.  What’s frustrating is that a good and necessary “marker” doesn’t get made in my mental-and-digital record of things.

I had meant to spend a good amount of time with Alan Jacobs’s How to Think, a nice and quick read that dropped a few months ago.  The book has a number of great things as components of the author’s main argument, things that I hope to revisit in my own “Thought” classes.

One of the best things that Jacobs brings out is the social nature of thinking.  He does this brilliantly by contrasting two popular essays by C. S. Lewis: “Membership” and “The Inner Ring.”  It’s a great example of “thinking Christianly” without beating people over the head with it.  In the chapter titled “Attractions,” Jacobs asserts:

That’s a very sobering assertion, particularly to someone who strongly thinks that what you believe matters.  But I think Jacobs is onto something.  I have found that similarity of belief doesn’t necessarily become the foundation for better work so much as it becomes an excuse to refrain from wrestling with difficult things (including the implications of the things believed in common).

One of the other “unclosed loops” that I need to get back around to before the month closes out is a previous mention of C. S. Lewis’s Mere Christianity.  At the end of last semester, I decided to make the book required reading for my senior Bible class.  It’s a trial run, a way of seeing (1) if it is doable and (2) if it could be a junior-level reading.  Because I’d really like to get to Jacobs’s How to Think with students.  Agree with him or not, Lewis and his work in Mere Christianity is a great example of a long-form argument that starts well and goes in the right direction.

“How to think” is something that a professor like Christian Smith (mentioned in a post here yesterday) would probably say is missing from the current higher education experience.  That he notes the deep roots of this in our recent past and the long-term implications of this for our future is a sobering reminder that many of us have not been trained in a good kind of metacognition (we can call it out in our students, but we probably aren’t all that able to call it out in ourselves).  It’s a good and consistent challenge for each of us . . . and for the institutions we inhabit.