The Thread of Imagination

In yesterday’s post I mentioned some words and phrases that I’d been mulling over a little bit but hoped to mull over more this holiday weekend.  I think I’d like to start with the thread of imagination. 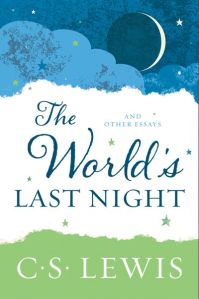 Somewhere along the way, from some book I no longer remember, I learned that faith and imagination are intimately tied together.  And that’s not just the “artistic” idea of the imagination.  It’s something like Charles Taylor’s “social imaginary” idea: the way you perceive and sense the world to be, the way you understand it working or not.  As a Christian, my belief in things I cannot see, that have been passed down by those who saw and heard and touched, that have been confirmed in odd but comforting ways in my own experience, requires a constant act of imagination, to believe things are a particular way even when there can be little or no evidence for it in the moment.

The Bible, of course, trains us in seeing the world by faith, gives us the stars and constellations, locations and the map, to serve as the framework for living from this life to the next.  The church is supposed to help hold this vision together for us, to make it visible in ways no other place or people can.  Even still, things like instrumentalization tend to get in the way of some of that vital vision-casting.

This next week in chapel we’re starting our “Advent” series.  Sure, it’s a week early, but that’s okay (as we end the semester before Advent’s end).  Tonight at dinner I reread C. S. Lewis’s “The World’s Last Night” as a way of getting a layer or two added to my thinking.  I actually think of the essay often, particularly what it says about the role of apocalyptic literature in 1st century Judaism and early Christianity.  The return of Jesus, which is often the focus of the first half of Advent, is a significant Christian belief that should shape our imagination.  It’s also a belief that we don’t quite know what to do with at times, that Lewis correctly notes that we too easily write off as the product of an unnecessarily apocalyptic kind of literature specific to that particular time.  Then Lewis asserts:

our Lord’s production of something like the other apocalyptic documents would not necessarily result from His supposed bondage to the errors of his period, but would be the Divine exploitation of a sound element in contemporary Judaism: nay, the time and place in which it pleased Him to be incarnate would, presumably, have been chosen because, there and then, that element existed, and had, by His eternal providence, been developed for that very purpose.

I want my mind and heart to be shaped by the stories and words of the Bible, so many of the images that get caught up in John’s Revelation when the Story comes to an end.  And then I want to live out of that imagination, knowing that it is rooted in a True Story deeper than that which is so easily seen.

This entry was posted in Books, Faith, Teaching and tagged Advent. Bookmark the permalink.